The Year of the Rat, meeting a friend in real life, plans for Lent, and more (7 Quick Takes)

Are you celebrating the Year of the Rat? We had some friends over last weekend to mark the Chinese New Year, and it was so good to be together. I had been worried that it might rain and interfere with sending the children outside to play. But the sun came out just as guests were arriving, so that worked out perfectly.

What worked out less perfectly was that the toilet in our main bathroom got stopped up just before guests arrived. So, my husband greeted them with an auger in his hands.

That same guest—our younger son’s godmother—also brought an absolutely spectacular rat cake for the party, so let’s focus on that rather than our plumbing issues. 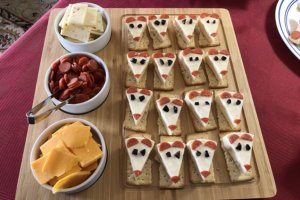 The day before our gathering I made a rat-shaped cheeseball. It was creepy, and no one would dare cut into it—except a friend with a medical degree. And once he cut it, it looked even more horrifying, so then no one would eat it. But it was entertaining, at least.

A friend had sent me this Cheese Mouse on a Cracker recipe. It called for sesame seeds, but I decided to use pepperoni and olives. The guests actually did eat those mice, which were quite tasty. I would absolutely serve those again. 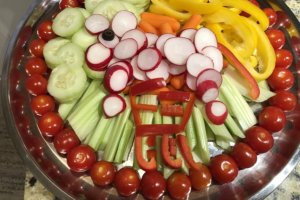 Our older son is taking Chinese at school this year, and he wrote the Chinese character for “rat” on the veggie tray I made. The day before I had run into a sweet woman at the grocery store who started telling me I should consider making a veggie tray in a fun shape like a train. I didn’t have the heart to tell her that I had plans to make mine in the shape of a rat.

The rat didn’t come across well, but the Chinese character saved the day. 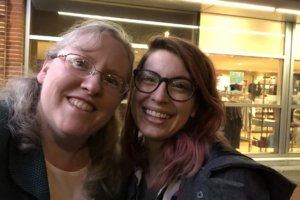 I was looking at Instagram last night, and I noticed that Haley of the blog, “Carrots for Michaelmas,” shared that she was heading to Baltimore for a retreat this weekend and didn’t have a ride from the airport. She was planning to catch an Uber.

I messaged Haley immediately to see if I could give her a ride—and she accepted! I’ve been a reader and fan of hers for a while, so I was thrilled. I had known she was coming to town, but I couldn’t make the conference. But I brought my copy of her book, The Grace of Enough, in the car, and she autographed it for me. Even better, though, was that we chatted in the car the whole way, discussing our children and whatever else.

The ride ended much too quickly, and I said goodbye and headed home. Haley had invited me to join a group for dinner, but I was looking forward to a relaxing Friday night at home with my family.

But I’m so grateful to have had a chance to meet Haley in real life—and I know her talk at the Mid-Atlantic Congress will be amazing.

When my brother took his family to Mass on Sunday, they saw someone had brought little bottles of water from the Jordan River to their church. Somehow when no one was watching, their 19-month-old drank some of the water.

That can only be a good thing, right? 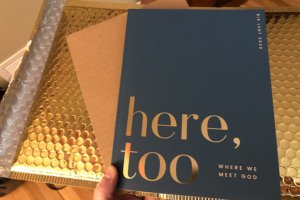 I always look forward to Lent, and this year I’m getting ready. I ordered the Blessed Is She Lent devotional, and it arrived! I haven’t opened it because Lent is still weeks away, but I love considering where we find God. That’s one of my favorite aspects of Ignatian spirituality—the concept that God is in all things.

What do you do for Lent? We’ll probably fill a prayer basket with names again this Lent because that give us a simple and beautiful way to make our Lenten journey as a family.

Please join me in praying for the people of China and for all those affected by the coronavirus. It’s so scary.

I have also been thinking of the families who are waiting anxiously to adopt their children from China. When we were waiting to adopt for the first time, China was dealing with the H1N1 virus, and I remember being really worried about how it would hold things up for us. It all worked out, and we met our son right when we should have. But waiting is so difficult.

Read more quick takes at Kelly’s blog, This Ain’t the Lyceum, and have a wonderful weekend.

Song of the Month: Integrity, by Alissa Robertshaw

Not Just Personal by Eberhard Arnold