Reflecting on a spontaneous trip to St. Anthony’s Shrine

My word of the year is “open.” When I woke up Friday morning, that was the word to describe my day—wide open.

I knew I wanted to go to Mass. Both the Baltimore Basilica and St. Anthony’s Shrine in Ellicott City have mid-day Masses on weekdays, and I was trying to decide which one to attend when I suddenly thought of my friend Connie. Connie and her husband adopted a little boy from China in July.

Connie and I live about 40 minutes apart. We have never attended Mass together or made a spontaneous plan to meet. Inviting a new mom to bring her active and adorable toddler to Mass with little notice seemed like a crazy idea. But I felt a real tug to reach out and invite her to join me. So, I did.

Connie said they would love to come! She didn’t know how long her son would last at Mass, especially since he usually naps at noon, but they would try.

We found seats in the back of the church. The Franciscans at the Shrine have always been warm and welcoming to my sons, so I was hopeful. But toddlers at Mass are wild cards.

Connie was well-prepared with books and toys, but her son was focused mainly on the church itself. He noticed everything, squealing and pointing at statues, climbing up and around the pew, and walking with his mama around the church.

I kept marveling at this child. When 2019 started, his parents were relatively early in the adoption process. They hadn’t even finished their home study. This baby boy was growing up on the other side of the world, waiting for a family. Now he has been home almost six months. He’s been baptized. And he was happily discovering a new church.

For this child we have prayed, I found myself thinking. We prayed even before we knew who he was. I remember meeting Connie for coffee back when she and her husband were just starting to discern adoption. I was excited when I learned they had decided to adopt—and then that they were adopting from China. I was ecstatic when they were matched with this little one and traveled to bring him home. And now here he was clapping his hands during “Hark! The Herald Angels Sing.”

Mass was beautiful—and even more beautiful to me because I was with a toddler who was experiencing the celebration in his own way. 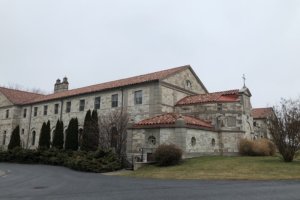 After Mass ended, a man stopped us and said kindly to Connie’s son, “Were you the one making that joyful noise?” The woman behind the counter at the gift shop treated him to a saint medal out of her money, counting out her own coins to place in the register. Everyone we encountered was gracious and welcoming.

As we explored the inside and outside of the Shrine, marveling at the Christmas decorations and watching Connie’s son take it all in, I was so grateful for our time together. The whole experience was a gift.

Afterward I was thinking about what a beautiful experience it was, and I was feeling grateful that we made it to Mass on First Friday. There’s a tradition in the Church of receiving Communion on nine First Fridays in a row as special devotion to the Sacred Heart. I’ve never managed to complete the First Friday novena—or even come anywhere close—but this is a new year, and every streak starts with one. 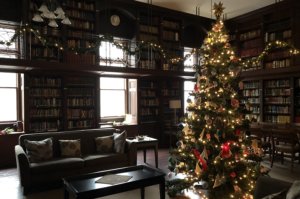 It was only later that I was thinking about how my saint for the year is St. Claude de la Colombiere, a Jesuit and a third child who was the confessor to St. Margaret Mary Alacoque. St. Margaret Mary had a great love for the Sacred Heart of Jesus and shared the revelation where Jesus introduced that particular devotion. As I was putting those pieces together afterward, I found myself smiling. All right, Jesus. Let’s see what You have in store.

“God is in the midst of us, or rather we are in the midst of him,” St. Claude de la Colombiere said. “Wherever we are he sees us and touches us: at prayer, at work, at table, at recreation.”

Maybe 2020 will simply be a year to be open and receptive to how God wants us to experience His love, wherever we happen to be.

Sense of worth | Archdiocese of Baltimore

Nearly 40 U.S. dioceses sign up to participate in #GivingTuesday Dec. 3

Courage ministry offers support for those with same-sex attraction